For the week ending May 30, 2020, the State of Michigan saw initial unemployment insurance claims decline when compared to the prior week, with 41,035 initial claims filed. This reflects a decrease of 23,539 initial claims, or 36.5 percent, from the week prior (May 23, 2020). Following several weeks of both initial claim stabilization and decreases, continued claims are beginning to trend down as well. The greatest number of new job losses and unemployment claims due to the shutdown occurred in late March and early April 2020. As parts of Michigan begin to reopen and stay at home restrictions loosen, we are likely to see these patterns continue. 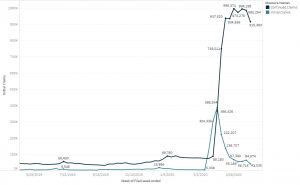 Michigan was tied for the second highest insured unemployment rate (IUR), or the number of individuals receiving unemployment insurance as a percentage of the jobs covered by the unemployment insurance system, reported in the country for the week ending May 16, 2020, at 22.9 percent.[1] As not all workers are covered under unemployment insurance, even after recent benefit expansions, this rate is consistently below the true unemployment rate. For much of April and May, Michigan reported the highest IUR in the nation. This week several other states and territories, including Maine, Puerto Rico, Louisiana and New Hampshire, have seen increases in their IURs as Michigan’s shows little change. While much of this continued elevated IUR is related to the nature of employment in Michigan – a larger percentage of our workforce is employed in occupations relating to advanced manufacturing, skilled trades and engineering and design, occupations initially deemed non-essential – streamlined filing in Michigan may have contributed to the early relatively rapid rise in the reported IUR, as a greater proportion of our unemployed individuals were accurately captured in this estimate. 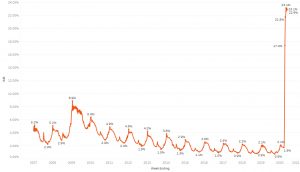 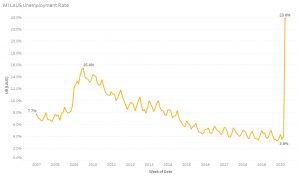 The IUR can be a useful predictor for the true unemployment rate (though these numbers are calculated differently – the former relies on official numbers of those receiving benefits while the latter is a measured through government surveys). Graphs of both the true unemployment rate and the IUR are presented here for comparison. While the true unemployment rate is only reported monthly, the IUR demonstrates that we can expect it to be hovering around 23 to 28 percent for the month of May. This is an advance prediction that may change over the next few weeks as the crisis continues. 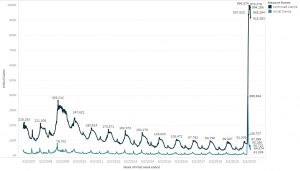 [2] Last week we predicted the IUR to be 22.3 percent for the week ending May 16, 2020. The difference of 0.6 percentage points can be explained through the revision up in the number of continued claims (915,383 counted versus advance numbers of 985,294 reported) enumerated between weeks.

[3] Covered employment rose for week ending April 4, 2020 for the first time since January 11, 2020. We expect that some of this is related to an increase in number of workers, such as gig and self-employed, who are now eligible for benefits.